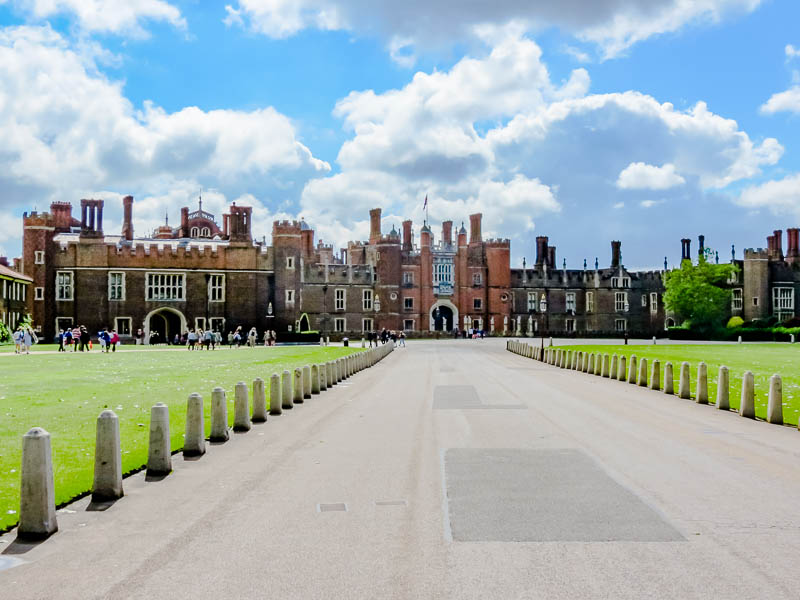 One of the finest Tudor palaces in England, Hampton Court is one of the best ways of spending a day in London. It was originally occupied as a manor by the Knights Hospitalier in the mid-thirteenth century. Royalty began using the area from 1400 and Henry VII was one of many kings who stayed here. Cardinal Wolsey developed Hampton Court further in the early 1500s as a Bishop’s Palace. Henry VIII stayed on several occasions in the royal suites but when he wanted to divorce Catherine of Aragon to marry Anne Boleyn, Cardinal Wolseley fell from favor, dying in 1530. The palace became the home of Henry VIII and his descendants from 1528 and is full of history. Here are just a few of the highlights to see and do at Hampton Court that will bring history to life.

Imagine Cooking for 600 People – Every Day

The Tudor kitchens were the largest in England during that time and could feed 600 people in a day. This was at the center of palace life and had a master of chefs as well as a number of sergeants and yeomen. Even today the kitchens are used to prepare Tudor meals. At their height, 600,000 gallons of beer were consumed a year, and over 1,870 pigs and 2,330 deer were roasted annually. 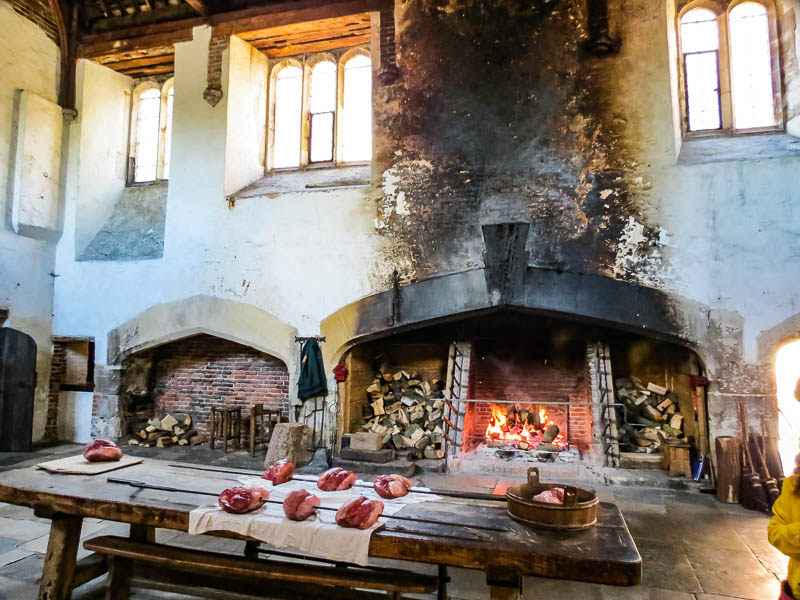 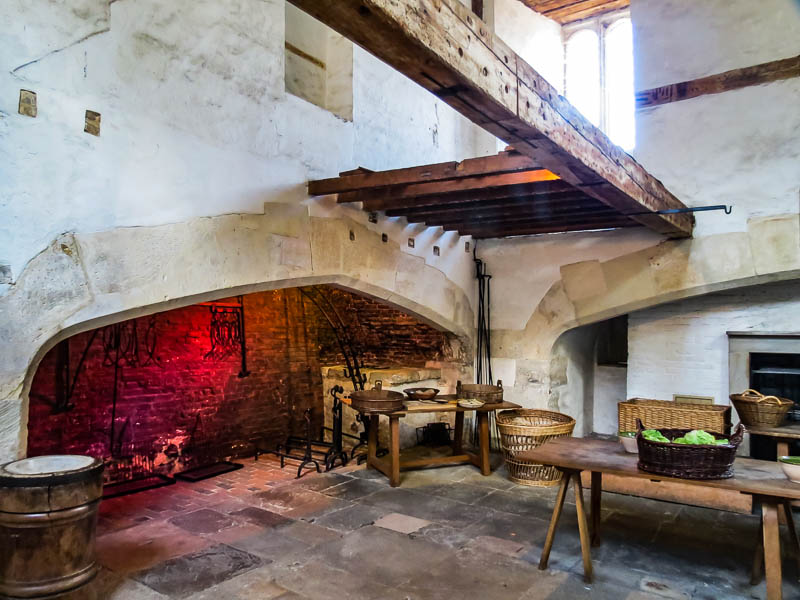 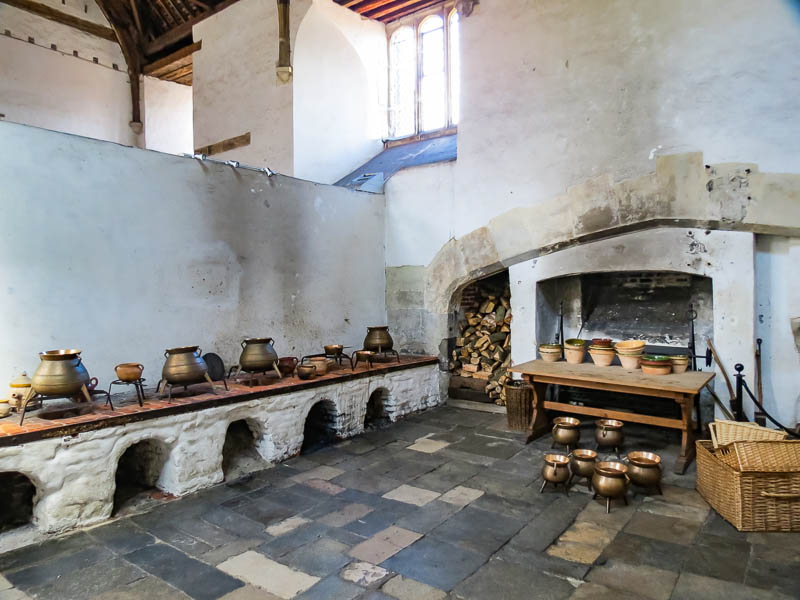 Relax in the Privy Garden

The beautiful privy Garden was designed for William III and was literally private. Today it is open to the public and the twelve panels on the Tijou Screen have emblems signifying various parts of the United Kingdom. William III died before the garden was finished and many workers were never paid by Queen Anne. In 1649 Charles I lived in the rooms overlooking the privy Gardens and when pursued by Cromwell’s army he made his escape through this garden and out along the river. He did not last long though and was caught and executed in Whitehall.

Get Lost in the Maze

The gardens at Hampton Court Palace are wonderful to explore but one of the highlights has to be the Maze. It was designed in 1700 by Henry Wise and George London and is the oldest surviving maze in the UK. The maze is planted with yew and is fun to spend an afternoon wandering around, literally getting lost. 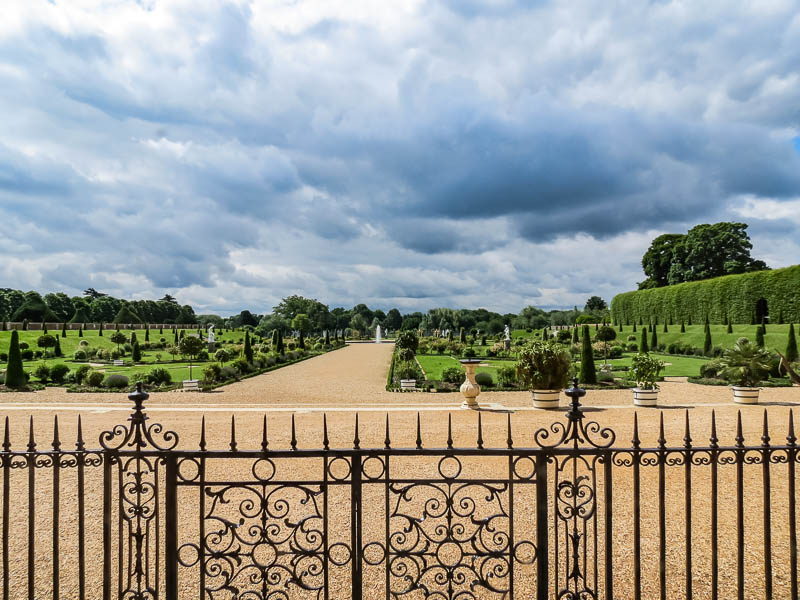 The well-manicured lawn and trees are a delight. The garden is very large, but walking along the pathways is relaxing and a lot of fun. 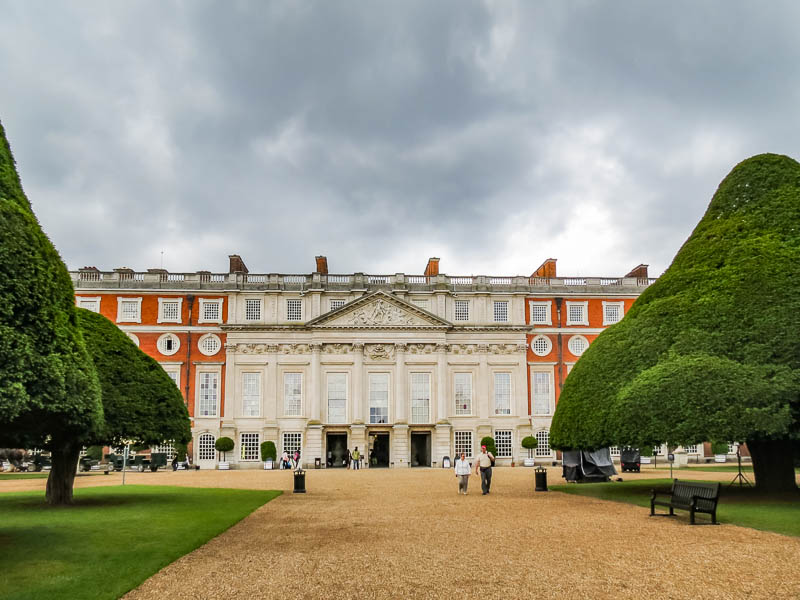 A 240-year-old vine is another highlight at Hampton Court Palace. This is a Black Homburg variety and Queen Victoria used to have the grapes brought to her residence on the Isle of Wight. Even today the vine is tended and produces fruit. Take a few minutes and walk through the room where the wine barrels are stored. 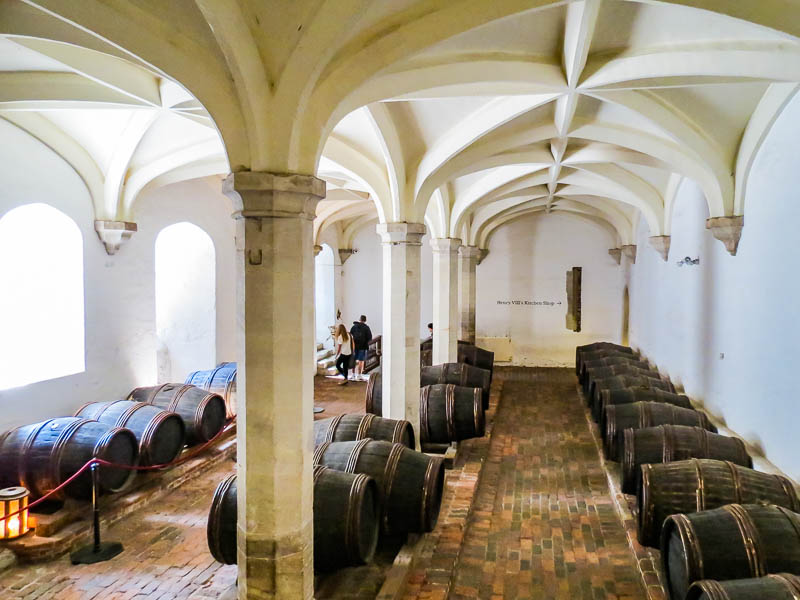 Views Of The Expansive Grounds

Some interesting photos of various courtyards and fountains. The palace is so large that it seems to go on forever. You get a feeling of Royal’s presence while moving around the grounds. 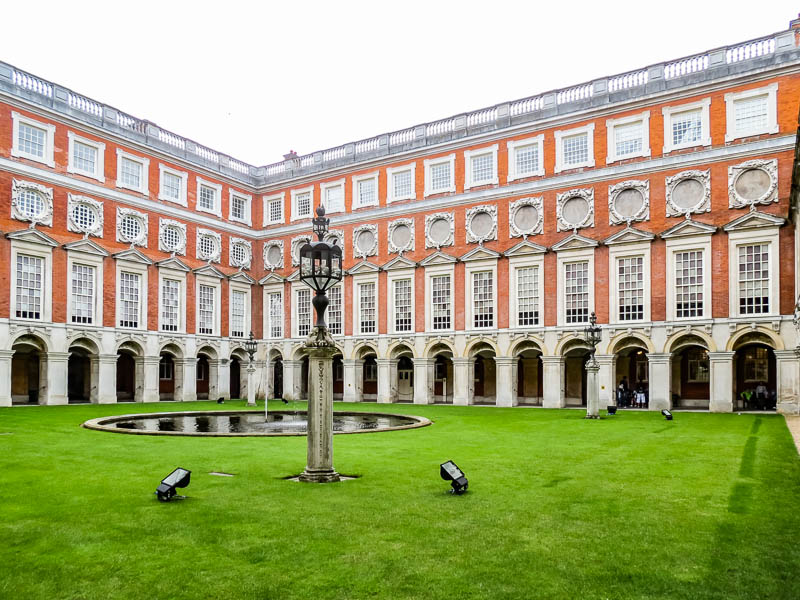 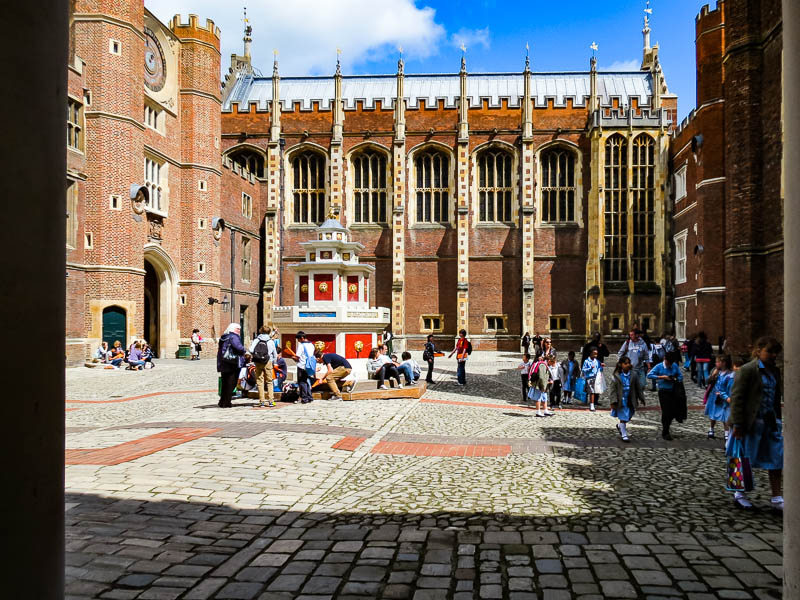 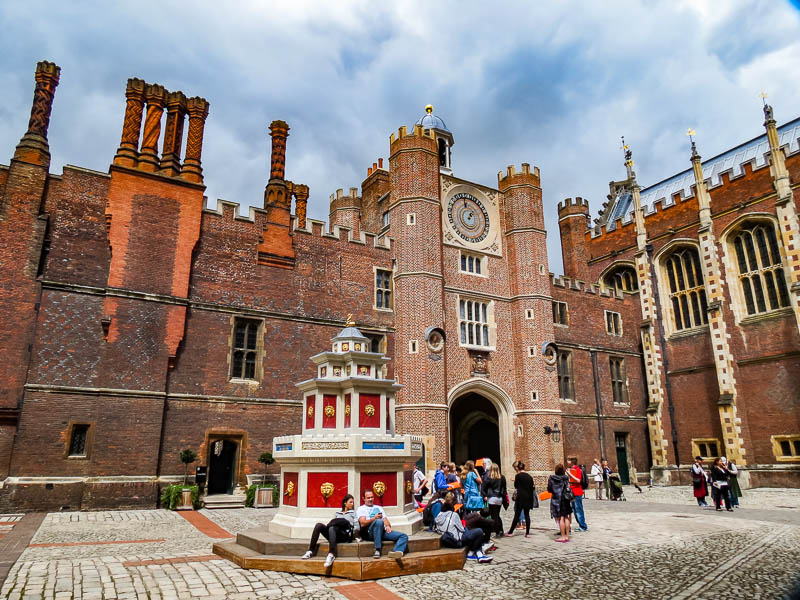 The Inner Rooms Of The Palace

Inside the palace, there are so many rooms to explore. My favorite was the room below that had swords and rifles all arranged into precise patterns. Look closely and you can make them out. 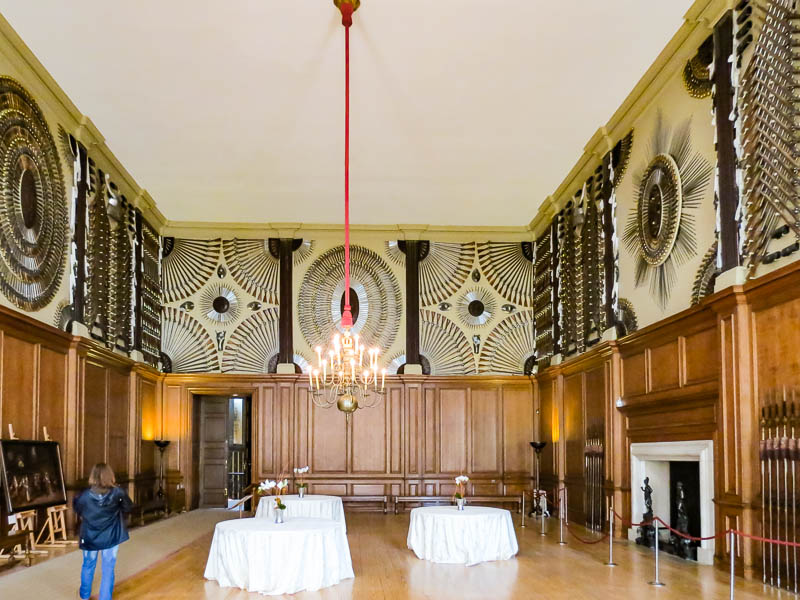 Another amazing large room that could be used for banquets or meetings. The tapestries on the walls are magnificent! 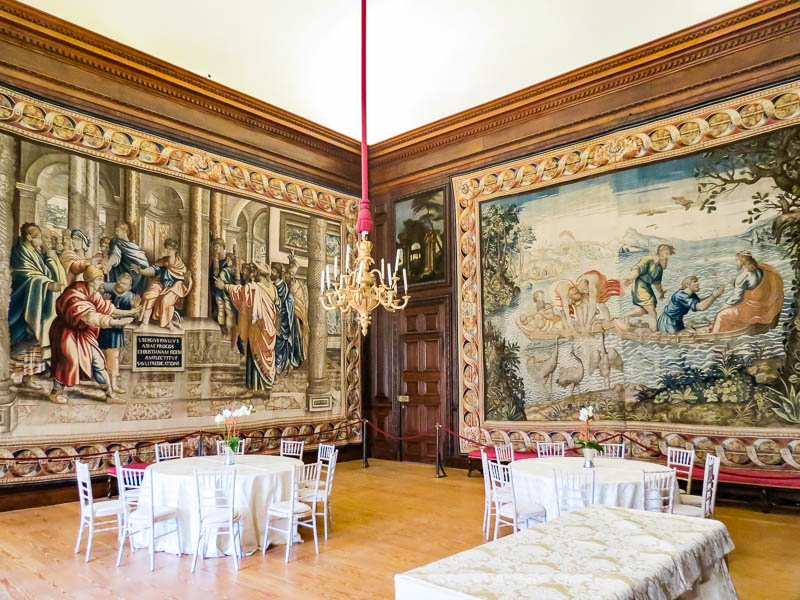 The bed-chamber of Henry VIII. We were told that this bed is actually used as an entryway to another room where the King slept. The large bed as shown here allowed the King to be awakened and dressed so that he was ready to face the day once coming out of the curtained bed. 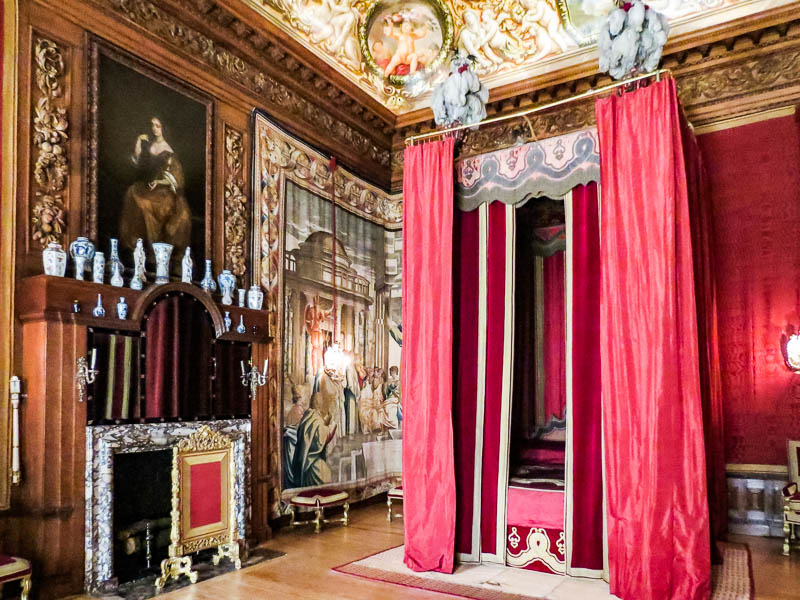 The grand staircase was truly amazing. With a beautiful mural on the wall and ceiling, it is an inspiring sight! 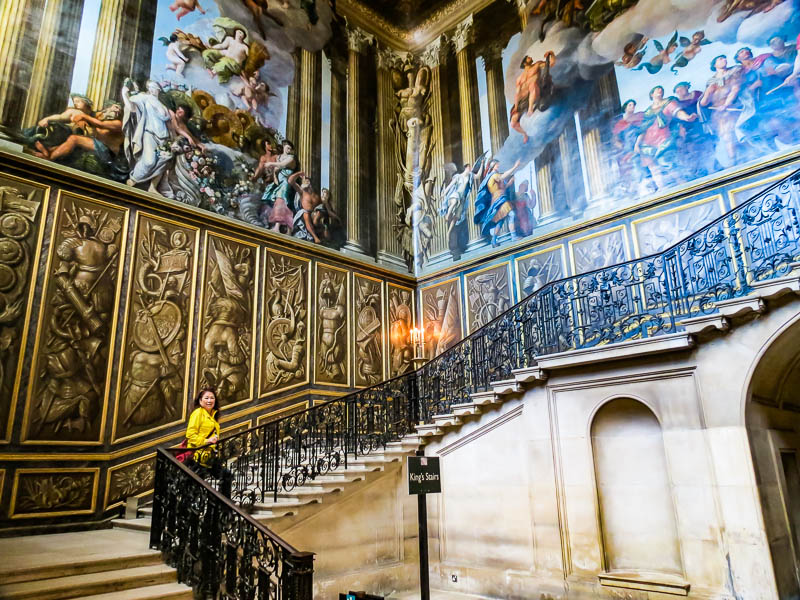 The Great Hall is one of the finest medieval halls in existence and was where Henry VIII hosted banquets and other festivities. It is also where William Shakespeare performed for royalty. The tapestries here date from Henry VIII’s reign and depict the Story of Abraham. With its hammer-beam roof, this is one of the most impressive places to spend time at Hampton Court.

We had originally signed up for a tour of London. One of the scheduled stops was to be a visit to Windsor Castle. However, Windsor Castle was closed that day for some unknown reason. Our tour company instead took us to Hampton Court Palace. We were a little disappointed when we heard the news. We had been looking forward to a guided tour of the Queen’s home. I had visions of a disappointing substitute tour of a small run-down palace. How wrong we were. The visit to Hampton Court Palace was interesting and exciting. I enjoyed my time there more than the day spent at the Palace of Versailles. It was the highlight of our tour in London! I highly recommend it!

Our tour guide was a very nice chap. He dressed as an English gentleman in a bowler hat and carried an umbrella. He even smoked a pipe and spoke with a formal British accent. It was great fun to be led by a man who really enjoyed leading the tour. 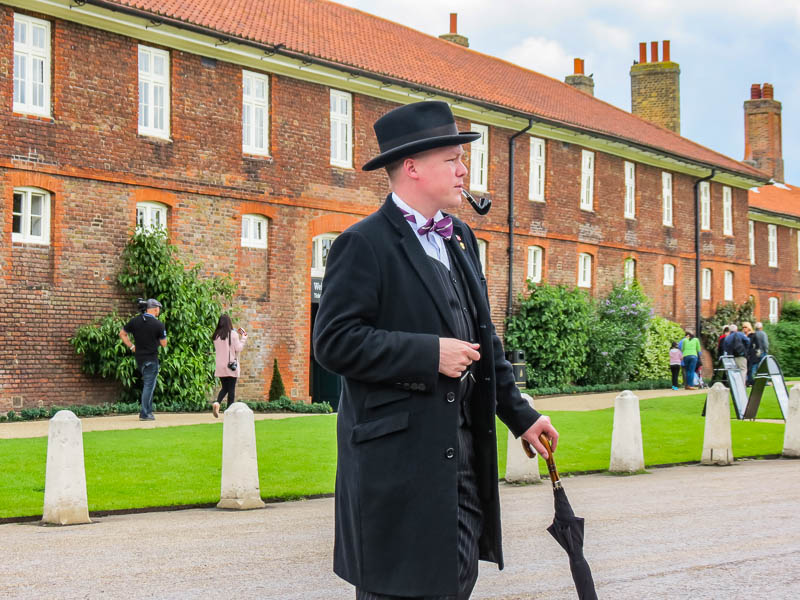 There are many tours in London that you can choose from. We recommend finding a tour that includes a visit to Hampton Court Palace. CLICK HERE to see what is available.

There are several places to buy food at the Palace. We stopped at the first restaurant we came across to make sure we had a small meal before setting out to explore the place.

Check VRBO for apartment and vacation rentals. CLICK HERE to view available apartments and rental rates in London, England.  Or check for other locations. Look for the pick-up points for tours you want to take before reserving an apartment. 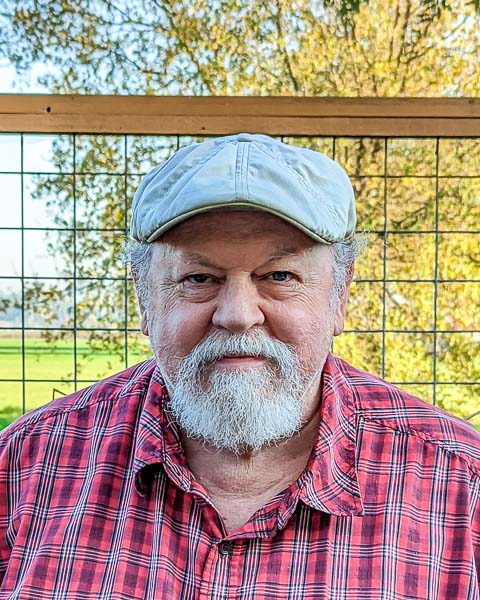